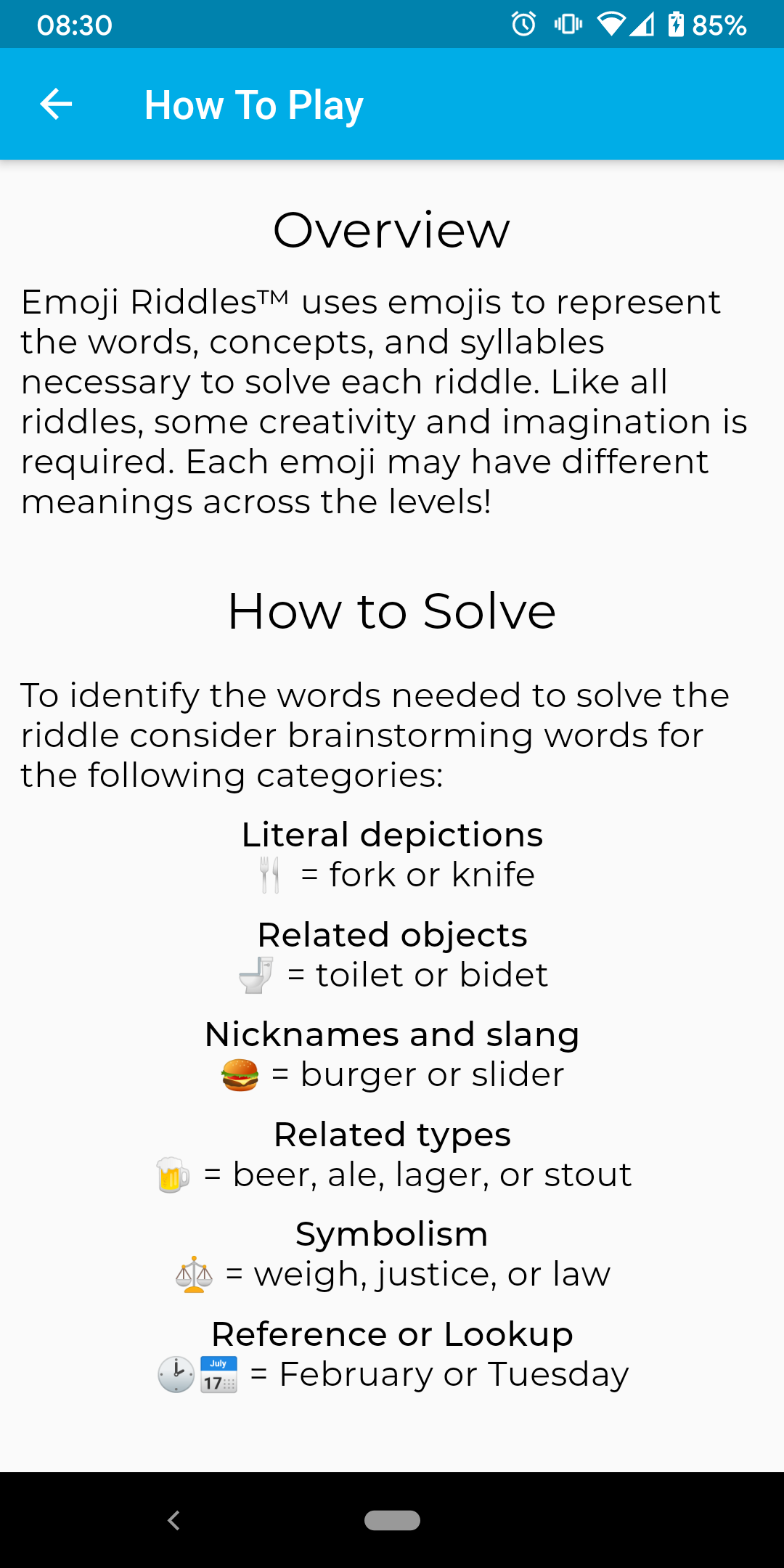 In our debut game, Emoji Riddles™, relies on a number of different aspects of emoji to make each riddle decipherable. As shown to the right, in the the how to play screen, the illustration of the emoji matters for brainstorming the underlying words in the riddle. If the emoji illustrations are not consistent from player to player, some players could suffer a poor experience and have lower overall engagement. This post seeks to help developers understand key differences when relying on the system default emoji for use in a mobile application.

The full emoji list currently shows over 2000 emoji with twelve different organizations, such as Google, Facebook, and Twitter, creating their own illustrations for each code point. Everything would be great if all devices contained all the emoji as soon as they are published to the specification, but that is hardly the case today. Instead, emoji are bundled with mobile operating system releases and thus if a device loses support users are stuck with the emoji available only in that version. If an app shows an emoji that is not available on that operating system a dreaded empty box or box with an X in it, which we learned quickly during test!

The Android ecosystem has traditionally been more fractured than the iOS ecosystem. All this means is that new Android operating system adoption tends to drag and on and on due to having to coordinate across so many device manufacturers. Google, the lead company in developing the Android ecosystem, has been working hard to fix this problem with efforts such as Project Treble and other software architecture updates.

According to StatCounter, the leading Android OS by active devices in North America, arguably the most valuable mobile market, are Android 10 Q, 9.0 Pie, and 8.0/8.1 Oreo, at roughly 44%, 24%, and 13.5% respectively. If a developer were to set their minimum SDK version (minSdkVersion) to Android 8.0 Oreo (API level 26) their app would be available to roughly 81.5% of active Android devices in North America. For 2021, Google is updating their target API level to 30. When looking world wide, Android 6.0 Marshmallow, is still very present (~7% at time of writing) and important to keep in mind if you are planning to deploy an app with emoji globally.

Google emoji images are used on most Android devices, Gmail Web Interface, Google Hangouts, and ChromeOS. These are provided as part of the Noto Emoji project. These images are also used for Slack on non-Apple platforms including Windows, Linux, and Android.> > Emojipedia

Guide to Growing Up 🧸 Emoji Riddles

Emoji Riddles™ are engaging pictogram puzzles for all ages. Relive your childhood memories with the Growing Up riddle pack!