A short history of hieroglyphs, writing systems, and emojis and a brief exploration of the future of AI written language.

Modern writing systems have enabled humanity to organize and maintain history and share knowledge over time. These systems have existed for thousands of years and have changed slowly from symbols and pictures to standardized alphabets and logograms. Over the last century machines have become sophisticated to the point of harboring some semblance of artificial intelligence. But as machine intelligence develops new writing systems may need to be created for machines to communicate with humans and vice versa. At Sidework AI, we are working on a writing system, Emoji AI, which consists of emojis that reflect some of the earliest forms of human written communication.

Hieroglyphs were among the earliest writing systems and were present among some of the most advanced empires of ancient times, such as the Egyptians, Turks, and Greeks. The hieroglyphs consist of symbols and logos that effectively formed an alphabet and partial words. These elements allow for full reconstruction of the information contained within the writing thus creating the first writing system. In fact, for a large time period of human history knowledge of the Egyptian hieroglyphic writing system was lost for over 1400 years, but was eventually reconstructed thanks to the Rosetta Stone. 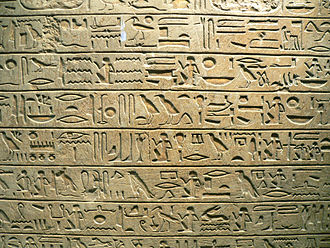 After hieroglyphs, many different groups of humans advanced writing systems into a few major categories that we have today. Most modern languages make use of multiple of these categories when written down. These include:

Emoji are ideograms such as 😃 and 💥 that originated in Japan in the late 1990s. Over time they have become standardized by the Unicode Consortium which seeks to provide a mapping for every modern language character to every computer. Emojis have proliferated due to standardization and proliferation of mobile messaging platforms. In 2015 the “Face With Tears of Joy” (😂) became word of the year by the Oxford University Press. Today, humans use emojis to extend their written language of choice and provide shorthand ways of communicating information.

With most writing systems fully captured by the Unicode mapping, artificial intelligence applications have launched to increase human communication. In 2016, Google deployed a neural machine translation system to improve automated translations between many of the most popular languages. This artificial intelligence based translation service has eclipsed some expert human translators and has been acknowledged to be “a viable, accurate tool for translating non–English-language [medical] trials” greatly expanding the potential for new medical advances. Additionally, recent advances in AI language generation can nearly write a complete article or fully functional computer program for itself with only a small prompt.

At Sidework AI, we released some of our early work on training artificial intelligence to learn to communicate with emojis via riddles in Emoji Riddles™. Our Emoji AI is based upon the English language and uses many of the foundational categories in “The Messy Middle” such as glyphs, syllables, and symbols represented by each emoji to communicate. Over the next few months, we will go in depth as to how the AI learned to make each of the riddle packs contained within the game using techniques similar to how Google and other AI leaders set the foundation for their breakthroughs.

Download Emoji Riddles™ on your favorite device and decipher the Emoji AI!